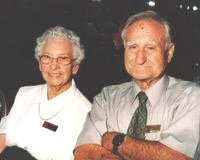 This Fund name grew out of discussions within the Adamson and Braybrook families as they considered how they could provide some philanthropic support to the community.  Life-long friends Isla Adamson and Laurie Braybrook decided to create a joint fund, hence the combined name “Adambray Families”.

Isla Adamson was born in Geelong and was raised in the Mt Moriac & Geelong districts.  She was involved in mixed farming and agricultural pursuits, especially the poultry industry.  A supporter of tennis clubs, mothers clubs, school councils, scouts and churches, Isla has been active in the Country Women’s’ Association since 1949.

A Councillor of the Royal Geelong Agricultural & Pastoral Society since 1991, Isla was the Homecraft Pavilion Convenor for 18 years.  She began exhibiting there in 1937 as a member of Young Farmers Club, learning principles of debating, animal husbandry cooking and woodwork and won numerous awards for her craftwork and needlework.

Isla and her late husband Ken had two children that have produced five grandchildren and one great-grandson.

Laurie Braybrook was born in Tallangatta and began his education in Swan Hill.  Midway through his primary school years his family moved to Geelong where his education continued, culminating in his graduation from the Gordon Technical College.

In 1943 Laurie was granted a release from a protected engineering industry position, enabling him to enrol in the Second AIF with which he saw overseas service during World War II on Bougainville Island. Upon his discharge in 1947 Laurie began working for the State Electricity Commission Geelong Power Station.  It was around that time that he and his late wife Fairlie began their association with the bee-keeping industry (for honey).

In 1962 Laurie transferred from the SEC to the Department of Agriculture as Apiary Officer, then as Senior Apiary Officer, until his retirement in 1990.  He chaired the Victorian Apiarists Library Trust for 17 years and was recognised internationally for his apiary work by “Apimondia”, the International Federation of Beekeeper Associations.  In retirement Laurie has made many precision model engines and vintage machines.  He has been a Councillor with the Geelong Agricultural & Pastoral Society since 1997.