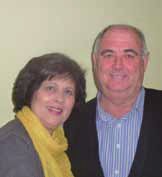 Brian and Barbara Antony have been residents of Geelong for 32 years following their move from Melbourne in the 1970’s. Their four children and six grand children all live in the Geelong area. Brian’s career has been in banking with the Westpac Bank where he worked for 36 years. After some years as the Geelong Regional Credit Manager and Senior Commercial Manager he was promoted to the position of Executive Manager at the Westpac Private Bank in Collins Street Melbourne. He retired from this role in 1996.

Brian and Barbara are very keen supporters of many local charities and Brian has been a member of Rotary for many years. They have done considerable work in Sri Lanka with the Rotary Club of Panadura where Brian’s great work has been recognised by his appointment as an Honorary Member of the Club.