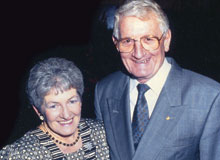 Will Bailey grew up in the south-eastern suburbs of Melbourne. His father was a highly qualified tradesman and his mother a devoted and strict housewife. At home he learned important values: work hard and help others if you can.

Dorothy was born in country Victoria and as both her father and mother had died before she was 21, she received support from Legacy as she grew up.  Will and Dorothy met at the Anglican Church in Murrumbeena. He was a banker and she a school teacher. Their marriage produced three delightful daughters.

Due to his career development as a banker, Will’s family had to move around with him and they lived in two states, New Zealand and the UK. Their locations included three years in Geelong in the early 60s where their youngest daughter was born.

After retiring as CEO of  the ANZ Bank, Will and Dorothy decided to “put something back into the community” in recognition of the benefits they had enjoyed. They established a Charitable Bequest through ANZ Trustees and co-founded a drop in centre for street people and the marginalised in Melbourne. Upon relocating to Geelong they decided to support the Geelong Community Foundation. Will was a Director of the Foundation from 2002 to 2009.