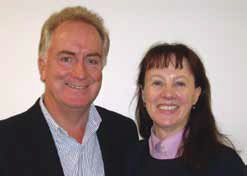 Sharon and Ed Coppe travelled the world together as Ed’s career with global giant, Mars Incorporated, took them from Ballarat to New Zealand, Asia, the USA, Europe and Russia. The couple and their children, James, born in Geelong in 1990 and Alex born in the UK in 1993, returned to Geelong in 1995. Believing they have been fortunate in life, they have become wonderful contributors to the Geelong community, both through donating time and energy to community organisations and causes as well as giving financially. One of those causes is the Geelong Community Foundation.

Ed was born in Geelong to recently arrived Italian immigrants, Francesco and Maria Coppe, in 1958 and was educated at Holy Family School and Chanel and St Joseph’s colleges. Completing his B.Com at Deakin University, Ed joined Mars, in Ballarat as a financial accountant with its confectionery business, met Sharon in 1984 and married in 1988. His career took him around the world and he had senior roles in finance, planning, marketing, sales and corporate strategy. Ed considers himself very fortunate to have seen how the world works, up close and personal.

Sharon was born in Ballarat to Len and Joan Brown and educated at Eureka Street Primary School and East Ballarat High School. She began working as a dental nurse after leaving school but boredom led her to start a Psychology degree at Ballarat University. Motherhood and relocations to London and Moscow resulted in Sharon pursuing her degree by transitioning to Deakin University, London’s Open University and back to Deakin. Sharon’s determination ultimately led her to finish her degree, complete her Honors and Masters degrees and achieve her ambition of a PhD in Psychology in 2001.

Today Sharon has followed her passion, working as a Clinical Psychologist. Since returning to Geelong, Ed has established Ed Coppe Wealth Management and has been very involved in community life. Ed was part of a small group that started the Committee for Geelong in 2001, has been a Councillor and Mayor of the City of Greater Geelong, and has served on numerous Geelong community boards and committees over the past years including G21 Geelong Region Alliance (as Chairperson), Regional Development Australia Barwon South West Committee (as Joint Deputy Chair) and the G21 Economic Development Pillar (as Chairman). He has also been a member of the State Government’s Regional Development Advisory Committee, Geelong Chamber of Commerce Board, Geelong Major Events Committee, Northern Futures Steering Committee and The Geelong Community Foundation Board.