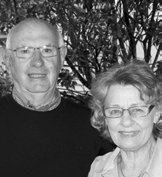 Barry was born in Melbourne, and after World War ll, he moved to Geelong with his parents. He was educated at Geelong College, then studied Commerce at Melbourne University, where he graduated with honours.
Barry returned to Geelong to join his father Reg, who was in partnership with Arch Collier, in Vogue Shoes. They introduced multiple fitting shoe ranges in all their stores, which had grown in number to 13, employing 100 staff. By 1979, Vogue Shoes had become one of the top five independent shoe retailers in Australia. Clarkes of England purchased the business in 1979.

In 1960, Barry married Janet Gordon, and in 1968, they purchased land at Ceres, and there built their home “Tintagel”. Farming became serious for Barry now, and he began cattle breeding with Santa Gertrudis, and a few years later, introduced Poll Herefords to the herd. With access to embryo transferring and to the best genetics worldwide, “Studbrook” Poll Hereford Stud was amongst the best in Australia. In 2006, the cattle herds were dispersed, and three years later, Barry and Jan retired and moved into Newtown. Barry passed away in 2017.
Daughter Belinda worked with Barry on administration and office management and continues in that role today. Eldest son Richard, who worked on the farm for 10 years, is now in retail, running Blue Suede Store in Highton. Son Cameron is a successful builder in Geelong and is possibly wider known as runner-up in Australia’s Got Talent in 2010.

The Geelong community gave great support to Barry and his family, through Vogue Shoes, and they are pleased to be able to give back through the Foundation and other charities they support.