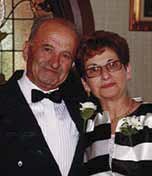 The late Ray Ramia was well-known around Geelong as the owner of the iconic northern suburbs landmark, the Sphinx Hotel. But what was less well-known about Ray is that Geelong became his home almost by accident.
In 1947, 21-year-old Ray arrived in Geelong on what he thought would be a short visit to his grandmother, who was in poor health. His intention was to return with her to Lebanon where her family could care for her. But his grandmother had other ideas, refused to leave Australia and Ray decided to stay and look after her.

In 1948, aged 22, Ray established his first business as a tailor in Autumn Street, working long hours building the business up to the stage where it employed 16 seamstresses and tailors.

By 1954, Ray thought it was time to start a family and in 1955, after an absence of eight years, he finally made his way back to Lebanon to marry. He married Elaine Alam, his partner for 54 years and mother of their four children. The young couple returned to Geelong to live and in 1957, first son George was born followed by Paul 1960, Marlene 1962 and Julie 1964.

The year 1956 was a very busy one, with Ray opening Ramia’s Exclusive Menswear in Little Malop Street. Over time, Ray developed a reputation as a producer of uniforms, among many other tailored products, and eventually supplied uniforms for the police force throughout Victoria.

Deciding to diversify his business interests, in 1971 Ray built and operated the Golf View Hotel in Thompsons Road, North Geelong. In 1997, Ray and George decided it was time to update the Golf View and embarked on a major rebuilding and renovation program, including re-naming. They added the 15-metre-high replica of Egypt’s world-famous 4,500 year-old monument, The Sphinx, and renamed the complex as the Sphinx Entertainment Centre of Geelong. The venue is still owned and operated by the Ramia family after 38 years.

In 2005, Ray was seriously injured in a car accident but his courage and strength saw him recover and he could still be found talking to patrons at the Sphinx on most days. Ray and Elaine have 11 grandchildren, with many of them opting to be involved in the entertainment industry. Ray’s father died when he was only seven-years-old and his mother when he was 19. He built his life on the ethics of strong family values and hard work. With a passion for farms and building houses, Ray founded a building company in 1975 and built many homes in Bell Post Hill. He owned a farm at Lara and during the 1980s would travel there every day to feed his sheep and cattle with hay transported in the boot of his Rolls Royce. With all his activities, it is not surprising that when Ray’s sons and daughters were old enough, they joined in the work of operating the entertainment side of the family business, leaving the farming and building to their father.

George, who studied Business at Deakin University, worked for his father at the Golf View as a teenager then at 21 took over management of the entertainment side of the family’s interests. Over the years, George has started and operated a number of very successful entertainment venues in Geelong.

Ray also had a passion for Geelong which, through his own energy and business acumen, enabled him to become a very successful businessman. Geelong is much richer because of the man who came to Geelong for a short visit and never left. Ray and his family are putting some of their resources back into the community through the Geelong Community Foundation, assisting those who need some help along their way.