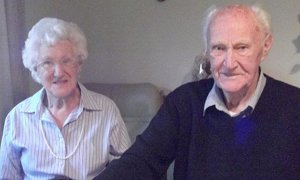 Born in Melbourne on the 6th December 1921, Tom was the son of a farmer and the eldest of 6 surviving children brought up on a farm at Blighty, a little town just out of Finley NSW. Tom came to Geelong as a teenager and attended St Mary’s Technical School. Whilst attending St Mary’s, Tom boarded with his Uncle Jack and Auntie Gert Scott. Jack more commonly referred to as JB had in 1925 set up his own machinery business – J. B. Scott which operated from 72 Moorabool Street. Tom returned to Blighty after completing his Intermediate (equivalent to year 10) spending time doing various jobs around the district. After turning 18, in 1939 he enlisted in the RAAF.

When the war ended and whilst working at Dunlop Rubber, Tom studied motor mechanics by correspondence. This consolidated much of what he had learnt about engines in the Air Force. Later Tom joined TAA as an aircraft mechanic working at various airports around Australia.

Irene was also born in Melbourne in 1924. She was the third of five daughters and after completing school after her “Merit” (year 8) she worked many jobs always looking to better her working conditions and pay. She joined the Australian Army during the Second World War learning many skills that she used in the business.

Tom and Irene met in 1948 and married in 1949. In 1950 they moved from Tasmania to Geelong and joined J. B. Scott. When JB died in 1961 Tom inherited the J. B. Scott business. Business was not easy in the ensuing years. Making a home for themselves and their three children and running a business (7 days a week in the harvest season) with lots of after-hours calls certainly had its challenges. However, working together as a team and hard work, the business survived and J. B. Scott Pty Ltd became a successful business with branches at Lismore and Colac and when it closed its doors in 2020 had the John Deere and Kubota franchises for the Geelong and Western District. The company continues to be managed by Tom and Irene’s son Andrew although with the focus no longer being on the agricultural industry.

Tom and Irene took a keen interest in the Geelong community, being involved in a range of local community organisations and undertaking various roles. Tom and Irene supported local youth by offering apprenticeships to many keen on Diesel Mechanics. This interest in young people is perpetuated by the family providing the corpus of funds to provide The Tom and Irene Cleary Memorial Scholarship.

About J. B. Scott Pty Ltd
J.B. Scott Pty. Ltd. was founded by Mr Jack Bernard Scott in 1925 and supported the Geelong area farming sector by suppling quality farm machinery, other merchandise and became known for its high level of customer service. The company became a multi franchise company with the main dealership in North Geelong as well as operating in Lismore and Colac.

After many years as a Massey Ferguson dealer, J. B. Scott Pty Ltd became a John Deere dealership in 1981. J. B. Scott Pty Ltd under Tom and Irene Cleary’s leadership focused on providing products and services for the man on the land with high importance given to the quality of service for all their products. This philosophy continued under Tom’s and Irene’s son Andrew’s management.

The company had strong links to the local farming community and were respected and known for:
• First class service backup for the farm machinery that it sold
• Fast and reliable spare parts service
• High quality second hand machinery

After 95 years servicing the local agricultural and horticultural industries, JB Scott closed its doors in October 2020. This scholarship in one small way it maintains its connection to the local industry.

Information and Application Form for the Scholarship can be downloaded by clicking as underlined.