You are using an outdated version of Microsoft's Internet Explorer web browser, which does not display modern web sites properly (including this one). To ensure you always see sites at their best and your browser security is up to date, it is highly recommended that you upgrade to a modern browser.
May 17 2019 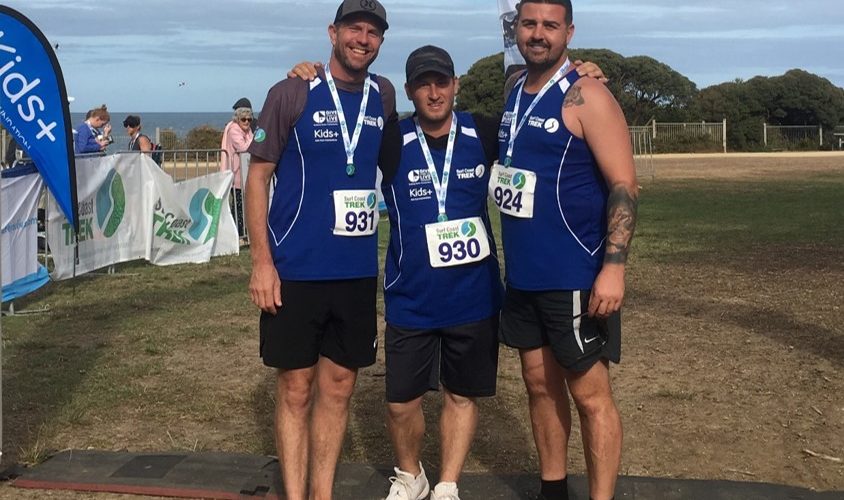 Kane, Scott and Luke after completing the Surf Coast Trek together.

Behind many success stories, there is often an individual or group of individuals who helped pave the way, offered sage advice, or simply said ‘keep going’ when we thought we’d reached our lowest point. It is these individuals who enable us to stand strong as we face our own personal adversities. Three years ago Scott Austin would have never pictured himself becoming a mentor, yet circumstance and fate aligned and his path crossed Luke’s.

Scott described the first time meeting Luke as ‘a startling experience’. While picking up dinner on Separation Street, he was approached by a tired, disheveled and shoeless Luke, who asked to borrow his mobile phone. Scott obliged but began to ask further questions, Luke shared that he was, in fact, homeless and had realised he had no one to call. He had an estranged relationship with his mother, so going home wasn’t an option. Scott was taken aback by Luke’s polite manner and youth. This wasn’t the typical image that came to his mind when he thought of a person being homeless.

After finding it extremely challenging to find somewhere for Luke to stay the night, Scott contacted Luke’s mother and asked if he could come home. After much consideration, she said the door would be left unlocked if Luke were to decide to return home. Scott advised Luke to take this opportunity to go home, took off his shoes, gave them to Luke to wear and sent him home with some money in a cab. This encounter facilitated the path for reconciliation between Luke and his mother, whom Scott describes as a pillar of strength.  Not only this, it would also begin Luke’s journey to recovery, form an unlikely friendship, and a bond between the two.

It was the following day that Luke’s mother contacted Scott to thank him for the kindness he had shown. She shared more of Luke’s story and encouraged that he and Scott meet again. Over a period of weekly catch-ups, Scott would learn that a series of poor choices and being surrounded by the wrong crowd had left Luke battling mental health issues and drug addiction. Scott found himself in a position where he had become an outside voice of encouragement; someone Luke was able to confide in without fear of judgment.

It was during this time that Scott was introduced to Kane Nuttall. Luke, alongside Scott’s mentoring, was also seeking help from Kane. Luke’s Mum had reached out to Kane for help after seeing an article in the paper about how he had overcome his own battle with addiction. At this time Kane didn’t have a driver’s license, and would travel hours by bus to meet him.  Four months later Kane set up ‘The Power In You’ Project at Community Veracity, Luke was Kane’s first client to undergo this project.

Together, Scott and Kane would provide Luke with the support, patience and life skills he needed to get back on his feet. Scott provided him with a safe and flexible work environment at Austin Wines & Co Estate to gain the independence a job provides. Kane offered personal experience and understanding of what Luke was dealing with, and a program that would rehabilitate him, allowing him to once again be a contributing member of society. Together they would engage in activities Luke enjoyed, helping him overcome his social anxiety that prevented him from even watching a football match in a stadium with thousands of fans. The two would remain patient and persistent as Luke experienced many highs and lows, never giving up on the brighter future they knew Luke would eventually achieve and so greatly deserved.

Today, Luke has successfully completed Kane’s ‘The Power In You’ Project and holds a full-time job. Three years have passed since Scott and Luke’s first encounter. They now train together three mornings a week at a local boot camp in Geelong. Scott has seen first-hand the incredible impact Kane’s “The Power In You” Project has. He is now involved in helping set up a strategic plan, that will enable Kane to deliver his mission of helping those who, just like Luke, have made a series of poor choices and are needing rehabilitation so they may join society again. More recently, the three completed the 40k Surf Coast Trek, alongside Luke’s mother and a number of Kane’s other clients. As they crossed the finish line, Scott described experiencing a feeling of pride. Not only had he and Luke completed the trek, but Luke had also come back from some really negative personal experiences, showing resilience and determination. “There was an energy in the air that day that was infectious,” Scott continued onto say. “It’s moments like those that will keep me involved in this for a long time to come”.

If you would like more information regarding the Power in You project  visit https://www.communityveracity.com.au/the-power-in-you-project