You are using an outdated version of Microsoft's Internet Explorer web browser, which does not display modern web sites properly (including this one). To ensure you always see sites at their best and your browser security is up to date, it is highly recommended that you upgrade to a modern browser.
September 26 2016 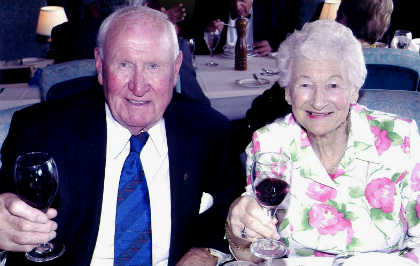 However, there was no time for a honeymoon as Fred had just been appointed by the Shell Oil Company as fuel agent in Geelong for its subsidiary, Neptune Oil Company.  Fred a former Wool Classer and Geelong Hotelier and Pauline a Registered Nurse, embarked on their new venture to build a successful petroleum distributorship business. Customers were in short supply initially but through hard work and great customer service the business grew substantially to become a key fuel distributor for the Geelong region.

The Flanagans retired from business in 1981 and turned their attention to helping others through Geelong Legacy.

Fred was a Second World War veteran who had served in New Guinea and Bougainville, wounded and mentioned in Despatches for distinguished service. Ably supported by Pauline, Fred held a number of positions with Geelong Legacy including President and was also inducted into the Legacy Foundation of Victoria as President.

Both Fred and Pauline loved living in Geelong and enjoyed involvement with our community through their many friendships and acquaintances throughout the region.

After 12 years of enjoyable residence at the Abervale Retirement Village in Grovedale, Fred passed away in January 2013 aged 88 years. Pauline passed away in March 2015 aged 90 and her Estate provided a number of legacies to not for profit organisations including $200k to the Geelong Community Foundation.