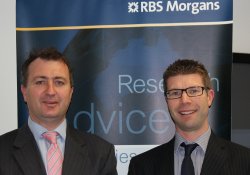 The families of Charles Baulch & Ben Williamson have come together to give to the Geelong community.

Charles was born and raised on a farm near Hamilton before attending Geelong College as a boarder. Charles went on to study at Latrobe University, completing a Bachelor of Finance, majoring in Banking & Finance. He then worked professionally in Melbourne in finance roles for 10 years, until returning to Geelong in 2007 to live with his family. Charles and his wife Sara have two daughters.

Ben was born and raised in Geelong. He attended Geelong College and then completed a Commerce degree at Deakin University, majoring in Accounting & Finance. Ben then moved to Melbourne to work professionally for 13 years in accounting and wealth management roles. He and his wife Lisa returned to Geelong to reside in 2010. They have two sons.

Ben and Charles are business owners of Morgans Financial Geelong. Morgans Financial is Australia’s largest full-service stockbroking and wealth management network, with around 60 offices nationally. The Geelong business has been operating for over 10 years, providing trusted private wealth management services to local, regional and interstate clients. Charles and Ben have a unique offering in the Geelong area, providing a proactive direct investment model (based on Morgans Financial research) coupled with financial planning. They enjoy developing long-term relationships with their clients to achieve their financial goals.

In addition to their regular contribution to the Geelong Community Foundation, Charles and Ben have also sought the support of The Morgans Financial Foundation, which has matched Ben and Charles’ gifting and is being directed to specific local charities.

Morgans Financial Geelong is proud to be locally owned and operating in Geelong and feels it is important to regularly give back to the Greater Geelong community. Ben and Charles have a desire to be good corporate citizens and in gifting, hope that they positively influence others to follow their lead. They are pleased to be able to contribute to improving the lives and support the diverse needs of the community in which their young families are being raised. In naming the Fund after their families, the hope is all members will have an involvement in developing the Fund over time.