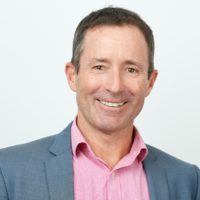 Andrew is a founding Director of Maven Insurance + Advisory, an insurance broking and ﬁnancial services business that commenced on the Surf Coast in 2019.

For nearly 15 years prior to this Andrew was Managing Director of Adroit Insurance & Risk, leading the business to fourfold growth, the completion of multiple mergers & acquisitions, the expansion of the Adroit network of insurance broking and ﬁnancial services to 12 businesses across 9 locations in regional (including Albury) and metropolitan Victoria. While Adroit’s success during this time was validated several times with multiple awards, it was the reputation within the insurance industry and the regions where it was represented, as a leading ‘Community’ partner that Andrew is most proud. In Geelong this is evidenced by the creation of the Adroit Insurance & Risk Golf Day Capital Grant in 2017, in partnership with the Foundation.

Andrew is a Foundation donor, a member of the Strategic Steering Group of the Torquay Football, Netball and Cricket Clubs, previous Chair of The Geelong College Parents Support Group for Cricket, past Board member of the St Therese Primary School in Torquay and served as a judge for the Geelong Chamber of Commerce Business Excellence Awards.