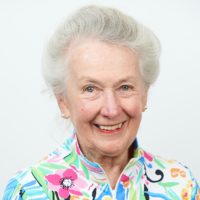 Val is a Founding Director of the Foundation, joining the original Board in 1999. She was Board Chair from 2009-2015.

Val has an interest in the theatre and has been the Patron of the Queenscliffe Lighthouse Theatre since its inception 21 years ago. She is also an Honorary JP and was awarded an OAM in 2009 for community service.