You are using an outdated version of Microsoft's Internet Explorer web browser, which does not display modern web sites properly (including this one). To ensure you always see sites at their best and your browser security is up to date, it is highly recommended that you upgrade to a modern browser.
February 16 2019 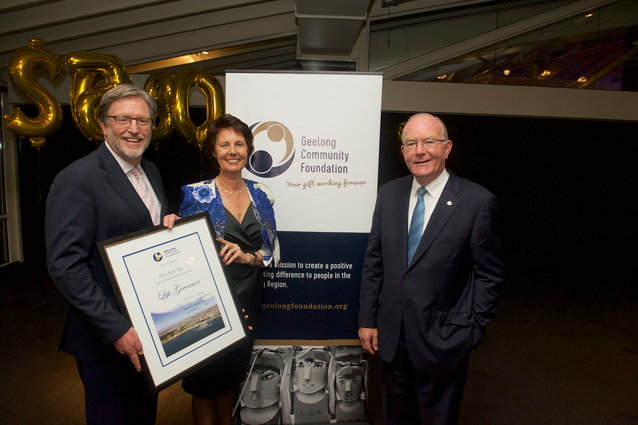 from left: Barry Fagg appointed life governor in 2017, next to Gail Rodgers and John Miles.

It’s well known that the Fagg family has and continues to make a significant contribution to the Geelong community, and has helped make the Geelong Community Foundation what it is today.

The Fagg’s has been contributing and working with the Foundation since 1999, and the Fagg family Fund is now one of the Foundation’s largest Named Sub Funds. In 2017-18, the family’s fund consisted of $1,514,204, making it possible for numerous grants to be given to community organisations across the Geelong region, and in turn providing significant support to the Geelong community.

Barry Fagg is the son of Bert and Ruth Fagg. He is the chairman and part owner of the timber and hardware business Fagg’s Mitre 10 and is a founding director of the Foundation. Barry sat down with Kathrine Stangeland, a Deakin University student intern for the Foundation, to speak more about his family, his values, and what people can do if they wish to make a difference. “I felt like there was a need for greater philanthropic support for organisations in Geelong” Barry says.

In the late 1990s, Barry was asked to be on the steering committee to develop the Foundation. He continued as a board director for 17 years, including Chairman for five years. He encouraged his parents to support the Foundation as well, leading to one of the first Named Sub Funds to be established, The Fagg’s business. Barry’s father Bert Fagg was born in Geelong in 1917 and was part of the third generation to work in the family business.

The Fagg’s business is the eighth oldest family business in Australia and their history goes all the way back in 1854, when two brothers, Samuel and William Fagg, came to Australia from England during the Ballarat Goldrush. The brothers started an ironmongery and building materials business in Chilwell, and later moved it to Barwon Terrace, South Geelong, in 1860, which has ever since been their primary trading location.

Barry’s mother Ruth came to Geelong as a secondary school teacher, where she met Bert and had five children together. “Both were very community minded and wanted to give disadvantaged people a helping hand”. Barry goes on to share the incredible work his parents undertook to make a difference, including Bert’s involvement with the 1st Highton scouts, helping build their scout hall in the 1970s. He was also active in the Belmont Kindergarten, Wesley Uniting Church, Rotary Club of Belmont, and many other local community organisations.

Ruth was a passionate teacher and like her husband, she was also active in the community. She gave much of her time to school parent associations, Heartbeat, Community Aid Abroad (now Oxfam), Wesley Uniting Church and Probus.
Barry’s contribution to the Foundation, together with his brother Keith Fagg who was the mayor of Geelong in 2012, shows how their parents’ community work and philanthropy influenced their children. “Their involvement and support of the community rubbed off on my brother and me”. Barry acknowledges that he and his family were lucky to have a successful business and felt they had an obligation to give back to the community.

“People who have the ability to support others who need a helping hand, should. We are all in this together”

Barry explains that the Geelong Community Foundation is the best way to give to the community. “The Foundation’s perpetual fund grows every year and the income is distributed to various charitable organisations in the region”. The family also adds an amount to the Fagg Family Fund annually, so it’s not just capital growth involved but additional contributions to the Foundation.

When asked what people could do to contribute to the Geelong community, Barry recommends that if people have the ability, they should set up a Named Fund in the Foundation. It can be in their name, a family name, business name, organisation name, or the name of someone they admire. The Fund then goes to help various community organisations that give support to people in Geelong region. “The beauty is that it all stays in the Geelong region. It does not go around the state or other parts of Australia, or overseas”.

There are also other ways of contributing if you don’t have the ability to create a Named Fund, which requires a minimum of $10,000.

“Programs like Philanthropy 500 (P500), is a great way to be involved with the Foundation, and donors have a direct influence on where the money goes.”

Barry was appointed Life Governor of the Foundation when he retired from the Board in 2017.

Read more about Barry Fagg and his family history here.