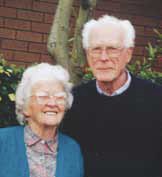 Alan Ray David OAM (1913-2005) and Sheila Mary David were committed to the Geelong Community throughout their six decades of married life. Although Alan, as a prominent accountant and businessman, was at the forefront of their dedicated community input, Sheila was the supportive partner in everything as well as pursuing her own voluntary committee work.

The four David children, Susan, Robert, Graeme and Murray are pleased to be involved with the Foundation and to honour their parents’ lives and their contribution to Geelong through this association. They all carry with them a strong and sincere understanding of their parents’ values, work and service to their community.

Over the years, Alan David has been publicly recognised for his visionary and dedicated voluntary work. In 2009 he received the posthumous naming of The Alan David Lodge (McKellar Centre/Barwon Health); in 1988 the Medal of the Order of Australia (OAM) for services to the Community; 1984 awarded a Geelong Performing Arts Centre Gold Pass for Life and in 1977 The Geelong and District Community Award.

After an outstanding Second World War Army career, Major Alan David returned to civilian life and established his own accountancy firm in Geelong. He also established his family while at the same time launching into a lifetime of community service.

The original Accountancy firm was in Alan’s own name and subsequently became Alan David and Clutterbuck then David, Clutterbuck and Barkley. Finally the business merged to become Illingworth, David and Co.

Alan was the inaugural secretary during formation of the Geelong Citizens Co-op Housing Societies (1945) and was one of the original eight secretaries in the Victorian movement. These societies were set up to assist people to fund and build their first homes in the period following World War II. In 1965 with J A Clutterbuck, Alan founded the Fyans Permanent Building Society.

From 1948 he was a leader in establishing Grace McKellar House and served in many roles as  Furnishing Appeal Chairman from 1959, Government Representative on committee (1959/79), President (1980/85) and he was appointed a Life Governor and then Patron.

In 1987 The Alan David Hall was named in his honour at Grace McKellar House which today is known as The McKellar Centre, administered by Barwon Health.

Alan was played a key role and was instrumental in the establishment of the Geelong Performing Arts Centre. He worked for 15 years handling all the administrative and financial details up until it was constructed and overall he was involved for 33 years from its origins as the Geelong Cultural Institute to finally being a Government Appointee to the founding GPAC Board of Trustees.

Alan and Sheila together were instrumental in establishing the important Geelong Art Gallery Silverware collection with a number of donated items of significant early Geelong Silversmithing.

As an inaugural member/life member of the Apex Club of Geelong, Alan was President in 1938/39 and after 22 years was the longest active serving member. He went on to launch the OASIS Club (Old Apexians Still In Service now Apex 40) where he also served as president for a number of the early years.

Alan was a very valued member of the Geelong Rotary Club for 39 years and was recognized as a Paul Harris Fellow in 1988. He was a committed member of the St. David’s Uniting Church, Newtown congregation and the church benefited greatly from Alan’s conscientious input over 50 years on the Board of Management and as an Elder.

Alan was Master of the City of Geelong Freemasons Lodge (1970/71) and continued his close association through the years until his death.

Sheila David was a volunteer driver for the Association for the Blind in Geelong (Illawarra) for 15 years and delivered Meals on Wheels as well as serving on the Grace McKellar Ladies Auxiliary from its inception in 1972.

Alan and Sheila now have 12 grand children. Susan Sutton (nee David) is a professional artist in the Geelong-Surf Coast region. She trained as a Secondary School art teacher and spent three decades in Art-Craft retailing.

Robert David graduated in Civil Engineering from Melbourne University in 1970. He is married to Amanda and has held Project Director roles on major infrastructure, transport and construction projects within Australia and internationally.

Graeme David is married to Helen and is a Bachelor of Agricultural Science (Melbourne 1972) and Master of Environmental Studies (Adelaide 1981). He is Director of EnPlan Australia Pty Ltd and is a Tribunal Member at the Victorian Civil and Administrative Tribunal.

Murray David graduated in Medicine (Monash 1976). He then qualified as a Specialist Anaesthetist in 1982. Since then he has worked in Queensland in Private Practice and is married to Gabrielle.