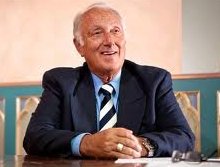 A life-time resident of Geelong and passionate family man, the late Frank Costa has demonstrated his support for the community through many acts of generosity to charitable causes across the Geelong region. He purchased the family’s produce business in the late 1950s. The organisation turns over more than $1 billion annually, employs more than 7000 people and is the largest privately owned grower, packager, marketer, distributor and exporter of fresh fruit and vegetables and grains in the Southern Hemisphere.

Frank was awarded the Order of Australia Medal in 1997, in acknowledgement of his service to youth and the community. 18 years later, at the 2015 Australia Day Honours, he was appointed an Officer of the Order of Australia for distinguished service to the community of Geelong through ongoing roles and contributions to a range of sports, business, religious, medical, educational and social welfare organisations. He was also awarded the Australian Sports Medal in 2001 for his instrumental role in Australian Rules Football, which included the restoration of the Geelong Cats Football Club to a position of prominence. In 2003, Frank was awarded the Centenary Medal by the Governor-General for his contribution to Australian society. Also that year, Deakin University awarded Frank the honorary degree Doctor of Laws.

When it comes to philanthropy and donating to charitable causes, one of which is the Geelong Community Foundation, Frank says that he is grateful for the success he has had in business and in his family life. It gives him pleasure therefore to be able to “give back to the community” that has been so supportive of him throughout his life. He encourages others to do the same, adding “it is only when you give that you receive”.