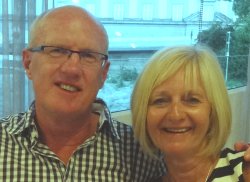 Gary and Heather Work established their Family Fund because of their belief in the Geelong Community Foundation and their desire to contribute back to the community. It is important to them that the income from the fund is distributed to charitable agencies within the local community. Their fund is to support children and youth services programs and projects because they rightly believe that “our children are our future”.

Gary was born in Bendigo and moved to Geelong in 1963. He was educated at Belmont High School and at 16 began work at the Victorian Railways as a clerical officer. He studied part time at the Gordon and then attended Deakin University, graduating with a Bachelor of Commerce. Gary was employed at Grace McKellar Centre in Finance and Senior Management for 18 years.

Heather was born in Geelong and educated at Belmont High School. She graduated from Geelong Teachers College in 1976 and taught at Grovedale West Primary School until the birth of the first of their three children (Alissa, Renee and Ashleigh).

Gary and Heather owned small businesses, finishing in 2009 by selling their Optus World franchises at the Westfield, Waurn Ponds and Corio Shopping centres. Both are retired and involved in community organisations in Geelong.