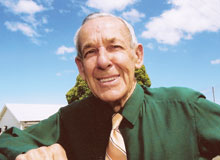 The generosity displayed by Ken Stott to the Geelong Community Foundation well and truly gave it the essential start that was needed to make it the success it has become today.

Ken grew up in Geelong and attended Newtown and Belmont State Schools. He began his working career as a carpenter with builder R.J. Gunn. From carpentry he graduated to joinery at R.J. Gunn and also developed his drawing talent into the design of house plans for builders, banks and home owners.

After five years, Ken moved to work in the joinery department at J.C. Taylor and Sons Pty Ltd while continuing to develop his drafting business. Early in World War 2, his drawing skills were recognised by Lou Bandt and he was offered a job in the advanced design office at Ford where he worked for 30 years. While at Ford he studied metallurgy and mechanical drawing at night at the Gordon Institute of Technology. He also studied and became a skilled investor in property and the stock market. After retiring in 1970, Ken continued to invest in stocks with considerable success. Ken died in 2005.

Ken was a modest, self effacing and pragmatic man who was generous in spirit and deed. He dedicated his gifts to the Foundation, to generate income which can be used to assist people who are in difficult circumstances and need help to assist them to enjoy a better life.