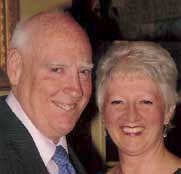 Ross and Jan Synot have been actively supporting a range of Geelong’s charitable, community and sporting organisations for more than 50 years. Ross is a fourth-generation Synot in Geelong, his great-grandfather John arriving in 1848. The early Synots were farmers and shopkeepers mainly in the Fyansford and Modewarre areas.

Ross was educated at Geelong College, qualified as an accountant and joined Grace McKellar Centre, which became the passion of his working life. Jan’s early years were in Numurkah before coming to Geelong as a teenager with her family. An accomplished artist, Jan is the owner of the “art is…studio and gallery” in Geelong. Jan and Ross met while working for the Country Roads Board in Geelong. They shared a sporting passion in tennis and badminton and for many years played mixed doubles together in both sports as well as being team members in badminton. They won many titles together over the years with the gold medals in badminton at the 1998 and 2002 World Masters Games being the highlights. Their partnership has been one where each supports the other’s interests. This support has been carried on with their children Mark and Michelle strongly supporting their parents’ endeavours. Mark and Michelle were also educated at Geelong College and are committed to continuing the Family Fund.

Ross’s role at Grace McKellar Centre reinforced his strong community support beliefs. Jan was a great support to Ross in his Chief Executive role and a source of sound advice. A service Ross helped set up was the Corio Community Contact, which provided emergency alarms to vulnerable members of our community. When the funds were transferred to the Geelong Community Foundation, Ross became the advisor for the Fund’s allocations.