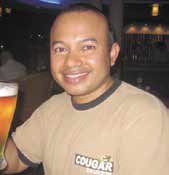 Dr Hazizul Hussain–Yusuf is a Microbiologist at a private research laboratory within the Geelong Hospital. He has worked in his current role since 2007, following completion of an MBA at Ballarat University.

Haz is no newcomer to Geelong. He first came to Geelong to study at Geelong Grammar School in 1980 and following completion of his VCE he attended Melbourne University for four years. He came back to work in Geelong after completing his Master’s Degree and PhD in Microbiology at the University of Kogoshima in Japan. He has a wide range of interests, with some being the current President of the Geelong Salsa Club along with being a registered reptile collector.