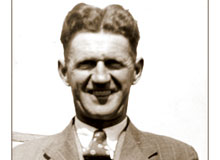 Harold was born in 1905 in East Geelong and moved with his family when quite young to Walker Street in North Geelong, where he lived for 90 years in the house his father built.

He commenced primary school at the North Geelong School in Separation Street before moving to the new school on the corner of Bay Street and Melbourne Road. Evidently, school was not a big deal for Harold but he was a remarkable person considering what he accomplished during his lifetime.

As a young boy, he explored North Geelong, especially down to the bay where he enjoyed swimming and going out with Captain Cunningham on his boat.

In 1927, he obtained work at Fords and he worked there for 22 years where he became the Foreman of the Body Building – Upholstery section. After his Ford experience, Harold worked at a number of organisations with one being the Federal Woollen Mills/Classweave.

He liked Ford cars and purchased his last new one when he was 92. At 94, he moved into Rosalie Nursing home but would go by taxi to indoor bowls at Highton on Saturday nights and over to Geelong West Bowls Club where he was an honorary member.

Harold Leighton died in 2004. He was always known as a good man, good friend and neighbour. He never married, lived with his sister Venie and was very supportive of her during her life. Harold’s wish was that his estate be used to help people in the Geelong region and part of it has been given as a gift to the Geelong Community Foundation.