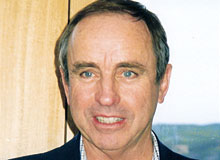 Edwin Dimmick was born in 1938 in Queensland and grew up at Boonah. He attended the local primary school and won a boarding scholarship to attend Ipswich Grammar. He was an excellent student academically and also excelled at sport in rugby, cricket and swimming.

His tertiary education began at the Gordon Institute of Technology in Geelong where Ted completed a course in textile technology and then followed a part-time science course at the University of Queensland. He first worked in the textile industry at Queensland Woollen Mills before going to England to study textile design at Bradford.

In 1961, he married Wendy Philbrick. In 1970, they moved to Geelong where Ted started his own business, Geelong Weavers, in Chilwell.

Later, he bought the RS&S Mill and founded Geelong Textiles. As Managing Director, he built a strong business and the company continues to operate today.

In 1995, when Fletcher Jones was about to be closed, Ted felt that it was a business that could continue as a successful one and with his great knowledge of the textile industry, he and partner Peter Pausewang stepped in to rescue it.

While there were many difficulties at various times, Fletcher Jones, under Ted’s drive and strong leadership, survived as a successful retail chain. The iconic brand that started in Warrnambool by Fletcher Jones lives on today due to Ted’s initiative.

Ted died on June 26 in 2008 and was described by one of the eulogists at his funeral as “the last of the merchant venturers” and “a man who took great risks, but was extraordinarily well balanced”.

He always had time for family and friends and enjoyed when he could leave work behind for “just a small time” at Eastern View and the Sunshine Coast. He enjoyed the Geelong Cats and was very happy to see the 2007 Grand Final win, as for some years he had suffered from the discomfort and progressive weakening of motor neurone disease.

Ted was a cultured, Christian gentleman who, as well as his sports, enjoyed the arts, classical music and ballet. In his own quiet way he was a generous donor to the Geelong Art Gallery Fletcher Jones art prize, many charitable causes including United Way, Lifeline and a Geelong initiated Catholic mission project in Uganda.

Ted started the EF and W Dimmick Fund in the Geelong Community Foundation in 2005. His name and legacy of support for the Geelong region, which became his home in 1970, will live on and grow over the years to come.