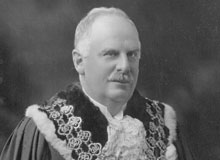 Howard Hitchcock, 1866 – 1932, was one of Geelong’s most public spirited citizens from a family noted for its benefactions to worthy causes.

The Hitchcock family, led by George and Annie and son Howard and his wife Louie, were instrumental in establishing and enhancing many charitable, religious and educational bodies. Howard was born and raised in Geelong and spent his entire life in this town. His principal calling was as a retailer and he owned and directed one of the region’s largest department stores, Bright and Hitchcock. His greatest contribution to Geelong came with his entry to local government and becoming five times Mayor from 1917 to 1922.

The legacy of Howard’s leadership as mayor is still evident today in Geelong’s amenity and infrastructure in Johnstone Park, the Eastern Beach, the Geelong Hospital, Moorabool Street bridge, the Peace Memorial Foyer, Kardinia Park Football Stadium, and the Barwon River Rowing Course. He initiated the building of the Great Ocean Road and chaired the project fund raising committee for many years. Howard’s ruling passion was that of ‘giving’ to those less fortunate than he and establishing or assisting causes having charitable or philanthropic purposes. He established a substantial bequest fund for charitable purposes so that his, and his family’s, values could be perpetuated in the Geelong community. The residue of that fund was given to the Foundation after several substantial grants were made to other Geelong organisations.