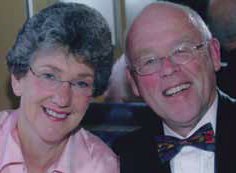 The Hudson Family Fund was established by Peter and Judy Hudson as a means through which they could give back to the Geelong community for today and into the future.

After raising their family in Geelong, Peter and Judy were attracted to the long-term community asset that the Foundation provides with all donations being responsibly and ethically managed in perpetuity. The income generated through the investment of donations in the Fund being used to support a wide variety of health and human care needs in the Geelong region was also an important factor in their decision.

Peter, a fourth generation resident, grew up and was educated in Geelong. He has a long history of community involvement, including 10 years as CEO of United Way Geelong and three years as Chairman of both the Geelong Springding Festival and the Geelong Food Bank. He also served as Regional Chairman of the Australian Institute of Management for three years. He was a member of the Deakin University Animal Ethics Committee and the Rotary Club of Highton. Peter was also a Director of the Geelong Community Foundation from 2007 to 2014.

Judy, who grew up in East Gippsland, completed her general nursing training at the Alfred Hospital and her midwifery at the Queen Victoria Hospital. She later graduated with a Bachelor of Nursing at Deakin University. For more than 20 years, Judy also worked at St John of God Hospital in Geelong.