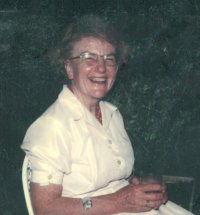 Lesley Taylor (B.A. Dip APA, Dip Ed, Cert. Hospital Administration) was born in Benalla, Victoria, and came to Geelong with her family when her father came from Bathurst, New South Wales, to work in Geelong. He had been appointed to the role of Manager at the Geelong Gas Company and the family settled in Drumcondra. Lesley’s mother was a nurse and she followed her mother into the field of healthcare.

Lesley attended Geelong High School, where she became a prefect and then attended Melbourne University before returning to Geelong where she worked with Mrs Barnard in the T & G building. Lesley moved on to the Geelong Hospital to work in the Physiotherapy Dept, where she finally became Head of the Department in late 1949. She retired from this position in 1974.

In the 73/74 Hospital Report, it is stated that “the Physio Department had been required to reduce staff due to Budget constraints. They have performed very well with reduced resources”.

After retirement from the hospital, Lesley taught English for some years at the Gordon Technical College. She was a great letter writer and enjoyed working in her garden. She was a founding member of the Geelong Field Naturalists Club and was very active in the 60s.

Lesley had a great love of animals and on one field excursion, she found and adopted an orphaned baby emu that had a fractured leg. She looked after the emu for some years until its death. Her love for animals was passed on to her many dogs over the years and she had a long-term involvement with the Geelong Animal Welfare Society.

Lesley died on May 19, 2011 aged 88 years. Her wish was that her estate be used to support people and animals in the Geelong region. As a result, a significant part of her estate has been entrusted as a gift to the Geelong Community Foundation.