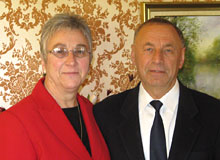 When 10-year-old Lino Bisinella arrived in Melbourne in 1954, aboard the Neptunia, never in his wildest dreams would he have envisaged that half-a-century later his name would be well-known throughout Geelong as a successful businessman.

The young Lino had no say in his father Gino’s decision to immigrate to Australia after the Second World War in the belief his family would find greater opportunities here and bind more closely together. Lino made his father’s vision a reality through hard work and good business acumen and now looks forward to giving back to the community in which he found success.

But it wasn’t always easy for the Bisinella family. Gino had married his wife Carmelina, in Cittadella, near Padua, in northern Italy, in 1929 and Lino became the third youngest of 10 children (seven boys and three girls). They experienced the Great Depression and its aftermath, the turmoil of war and even when they emigrated, they were unable to do so as a family, instead travelling in four separate groups over a period before all settled in Little River. They worked for market gardeners in the Little River and Werribee areas and, as their situation improved they purchased land in Thompson Road, Norlane, where they gradually built their home.

All 10 children married and had children so that there are 30 grand-children and 52 great-grand-children to date. Lino attended school in Little River and Norlane and, on leaving, he began a five-year apprenticeship as a plasterer at F C Walker and Sons, Geelong.

After three years, Lino’s ambition led to him beginning his own plastering business in 1965, doing renovation work and cycling around West Geelong to his jobs. As business expanded, he purchased 10 acres of land in Heales Road, Corio, and erected a small building where he manufactured plaster cornices. In 1973, L Bisinella Plasterers bought a small firm distributing Gyprock products in Melbourne. A large new warehouse was built at Heales Road and the firm again expanded and became the largest stockist of plaster in Victoria.

In the 1980s, Lino diversified into property development at various locations around Geelong as new sub-divisions opened up to accommodate Geelong’s growth. Lino also developed warehouse properties in the northern Geelong areas. Lino sold L Bisinella Plasterers to Pioneer in 1994 and concentrated on property development, becoming the major developer in the Lara area and a leader in the field in Geelong.

But life wasn’t all hard work and business deals. In 1967 Lino met Marina Giurco, who had immigrated to Geelong with her family from Trieste, also in northern Italy. Two years later in 1969 they married and lived in Norlane before moving to Lara in 1979. Lino and Marina have four children – Michelle, Bernard, Richard and Matthew – who all work in the family business.

Lino’s story is a wonderful example of what can be achieved with dedication to hard work and a commitment to providing good service and quality work to clients. Through the Geelong Community Foundation, Lino, Marina and the rest of the family are now giving back to the community which they have played such an important role in building and which has supported their businesses since the early 1960s.