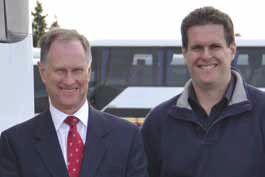 For more than 85 years, McHarry’s buses have been transporting people around Geelong. From small beginnings when John McHarry started with a single bus, McHarry’s Buslines is now the biggest bus company in Geelong with a fleet of 206 buses.

In the 1930s, John McHarry was working at Geelong’s Ford Plant as a master builder and he transported his own employees to work each day in his truck. He soon started to have many requests for a ride from Ford employees. John saw there was a demand for a passenger service to Ford and decided to purchase a bus. He made a successful tender for a bus from Victorian Railways and started his first service in 1932 and he quickly followed up with a second bus. With these two buses, McHarry’s was established and their first route service was to Highton. Later due to poor patronage, this route was sold and after many changes in ownership, it was taken over by Bender’s Busways. McHarry’s business grew rapidly and in 1933, John’s son Norman joined the business and two more buses were purchased that year to cope with the heavy demand for transport to Ford along with the increasing popularity of trips to seaside resorts.

In 1935, Norman married Alice and the couple built up the business with the purchase of three new buses in the following four years. Tragically, company founder John McHarry was killed in 1940, in an accident at the bus depot. Recovering from this sad loss, McHarry’s Buslines continued to grow and in 1951, the Breakwater and East Geelong routes were purchased. In the same year, the business amalgamated with other local bus companies – Green Star Passenger Service and Corio Buslines – to become known as Geelong Associated Buslines. However, this amalgamation lasted for only two years after which time the three companies returned to individual operation.
Over the next few years, McHarry’s was successful in tenders for several Education Department school services and the company soon outgrew its original bus depot on Kooyong Road. Conveniently, the old Corio Buslines Depot became available for purchase in 1965, and this provided ample room for the McHarry’s fleet. Fifteen years after parting from Geelong Associated Buslines, Norman and Alice decided to purchase the operation, which doubled their fleet to 36 buses. With more buses at their disposal, McHarry’s Buslines expanded its services to include camping trips to the Outback but with Norman’s death in 1975, the company decided to scale down its touring operations. Alice McHarry was assisted by her two adult children, John and Corrine, to continue operating the business and John’s wife Lyn later joined the company to assist in clerical matters. With continuing growth, the fleet soon reached 67 buses and 86 employees and it was decided that the company would run more efficiently if it had one large depot rather than a few smaller ones.

A new depot site with plenty of expansion room was purchased at Breakwater in 1988. Since then, McHarry’s has become the biggest bus company in Geelong with the purchase of Bellarine Buslines and Advance Coaches in 2000. This added a further 49 buses and increased the fleet to 125. John’s two children, Ashley and Lisa, are the fourth-generation family members and they joined the business in the 1990s. Ashley is now the General Manager and Director, while Lisa works in administration.

The company continues to invest in its employees, and has provided a fully equipped gym and personal trainer, along with a free internet cafe. In addition, a new training facility has been built to equip the workforce with the skills needed for now and beyond. Today, McHarry’s operates 206 buses, employs 300 staff and plans to remain a proud family owned and operated business for many years to come. They have served the people of Geelong very well with their transportation needs for more than 85 years, and are also serving those who are in need in our community through their Foundation Named Sub Fund.